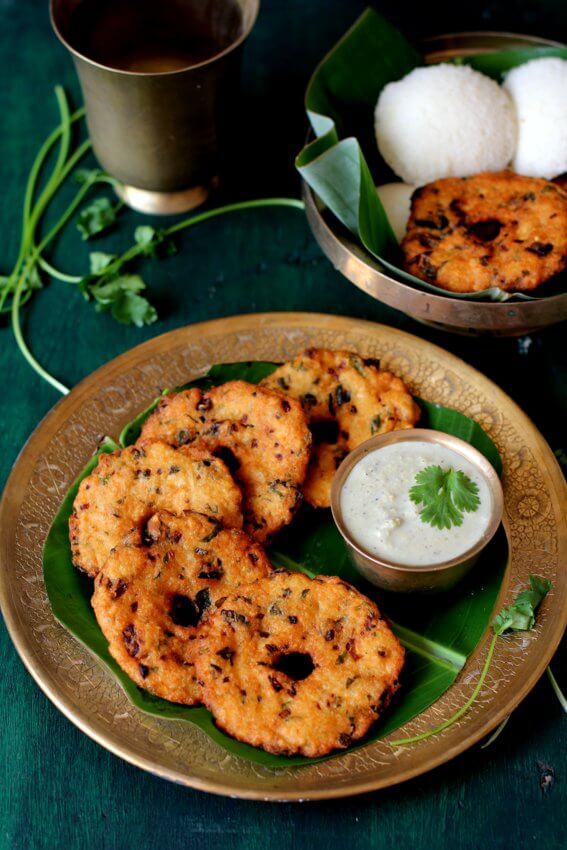 Keerai vadai makes for a perfect festive dish to celebrate Ugadi, the Telugu New Year which falls on April 8th, 2016. Keerai vadai is a urad dal based deep-fried crispy appetizer that has a variety of greens going into it. Vadai is a distinct food of South Indian culture. Keerai in Tamil means ‘green leafy vegetable’ and vadai or vada means ‘savory doughnut”. In Telugu, vadai go by the name ‘garelu’.

In South India, especially in Tamil Nadu, you will find a number of street vendors and tiffin centers selling these addictive snacks during the morning and evening hours. People flock around the hawker as he churns out these savory snacks in a large wide cooking vessel, piping hot off the stove. He serves the keerai vadai with a runny chutney that is usually coconut based. I have savored these during my trips down South in popular tiffin centers but the best keerai vadai that I ever tasted was at Tirumala, abode of Lord Balaji. The street hawker was right across the street we were staying and his keerai vadai were sold within minutes of preparing them. I watched the cook prepare them with such ease and I was also lucky to get the authentic keerai vadai recipe from her. She insisted that I should use all the greens/herbs mentioned in the recipe and not skimp on any one of them to savor the true flavor of keerai vadai.

The flavors and texture of keerai vadai will vary from hawker to hawker based on the ingredients that go into its making. Some hawkers shape the keerai very flat while few shape them into thicker vadai. I like them flat and crisp. The flatter the vadai is shaped, the crisper the vadai. Heat control is equally important to produce a crispy outer layer with a soft moist centre. I love the simplicity of this dish which relies mostly on greens, ginger and green chilies. 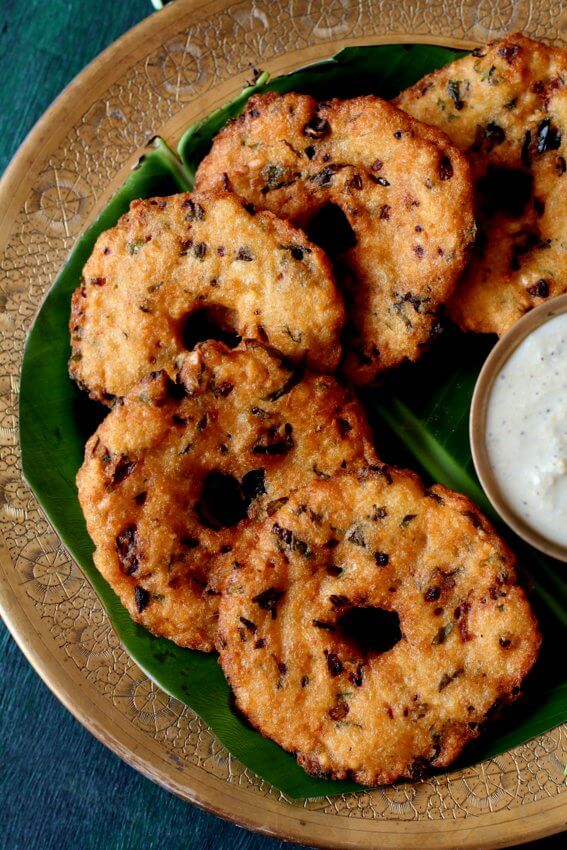 Basically, you need to use good quality whole, without skin, black gram dal aka urad dal. Wash and soak the urad dal in enough water for at least 2 to 3 hours. Rinse again and drain the water and coarsely grind the dal adding very little ice cold water in a mixer grinder. You should not use more than 4 or 5 tablespoons of ice cold water. It should not be a smooth paste. Grind coarsely such that bits of dal is visible and the batter has a rough texture. Add finely chopped onions, ginger, green chilies, spinach, coriander, mint leaves and salt. I have used spinach but you can use amaranth leaves as well. Beat the ground mixture with your hand for a minute for aeration.

Wet your hand with water and shape a large ball of the urad dal mixture. 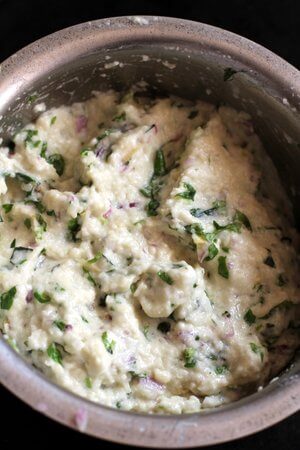 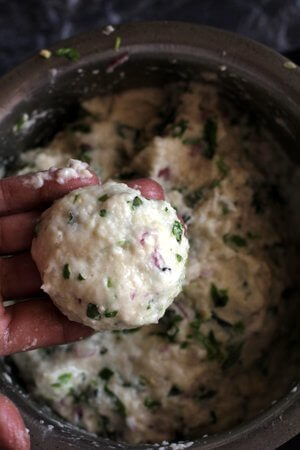 Flatten the shaped ball on a plastic sheet or banana leaf that has been moistened with water. It should not be more than 1/4″ thick and ensure that the outer edge of the vadai is very thin compared to the center. Make a hole in the center.

Heat enough oil for deep frying in a heavy bottomed vessel. Once the oil turns hot, carefully place the shaped vadai in the hot oil. Do not add more than 2 or 3 vadai at a time as we do not want to overcrowd the vessel. Reduce flame to medium high and leave them undisturbed for a little less than two minutes. Slowly flip them over and cook till it browns. Towards the end of the cooking process, increase flame to high and allow them to turn crisp and golden brown. Remove them with a slotted spoon onto a serving plate. Prepare keerai medu vadai with the rest of the batter in the same manner. 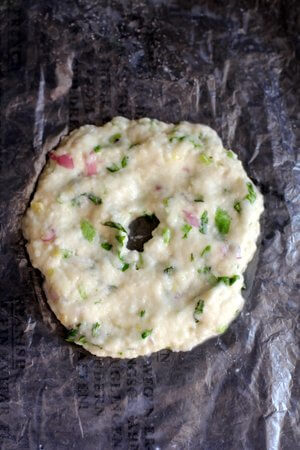 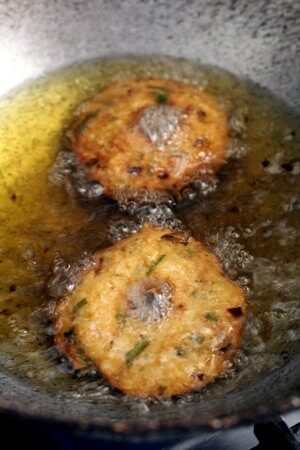 I served keerai vadai with hotel style coconut chutney and tiffin sambar for breakfast. If you are looking for a protein-rich vegetarian or vegan starter, then keerai vadai is the go-to snack. It makes for an irresistible snack when served with tomato ketchup and masala chai. They also make for a great lunch or tiffin box item. You should be bookmarking this recipe as it will surely make a fantastic festive dish this Ugadi. 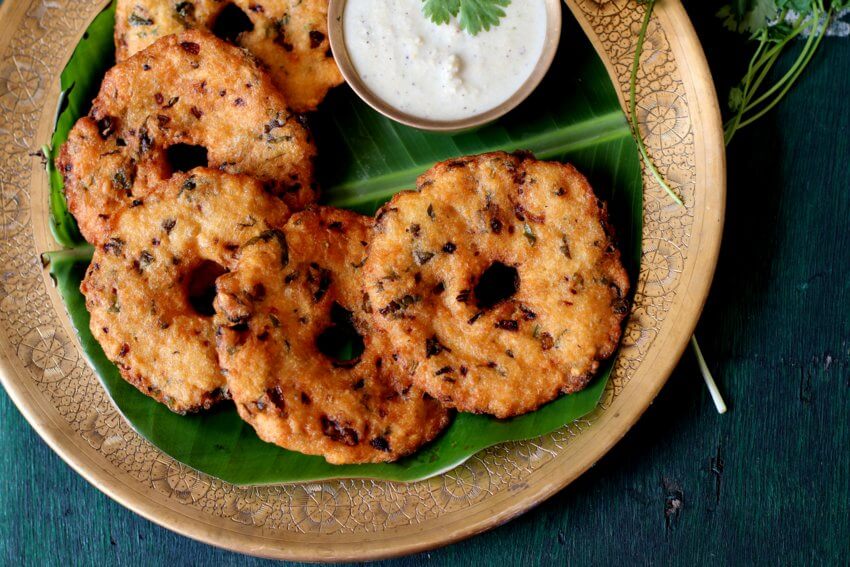 how to make keerai vadai

For festivals like Navratri, Varalakshmi vratham or while fasting, one can make the keerai vadai without onions.

How to make keera vadai at home